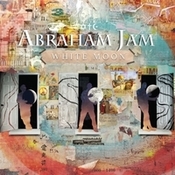 © Copyright - Abraham Jam / Dryad Publishing, Inc.
Three faiths. One band. In harmony. Billy Jonas, David LaMotte, and Dawud Wharnsby are seasoned songwriters who team up to sing a better story than the one we see on the news.

© Copyright - Abraham Jam / Dryad Publishing, Inc
So a Muslim, a Christian, and a Jew walk onto a stage... It's no joke. This trio of seasoned singer/songwriters— Billy Jonas, Dawud Wharnsby, and David LaMotte— team up to make the case that harmony is greater than unity. This is their debut CD.

GET REAL is Billy's studio follow-up to LIFE SO FAR. From matters of the heart, to geo-political intrigue, GET REAL invites the listener to climb into a "percussion-rich" universe full of sonic exploration and emotional adventurousness. GET REAL is filled with sounds that come from homemade and recycled object instruments ("industrial re-percussion": 5 gallon water bottle, pots & pans, bottles & cans, buckets, garbage bins and carpet tube marimbas), as well as a host of more traditional sounding instruments (guitar, bass, Middle Eastern & African percussion), and LOTS of voices!

LIVE 8 SONGS is a portrait of a turn-of-the 21st century hootenanny, in the grand folk tradition, where everybody's in the band. With the exception of the bonus track, "Billy Jonas LIVE" was recorded all during one concert on February 16, 2002, by Neale Eckstein at Fox Run, in Sudbury, MA. It features Billy solo, accompanied by a stellar "audience orchestra" who learn their parts as they go. Special guests include Eric Schwartz (backup vocals on "Coup d'Etat") and David Wilcox (backup vocals on the bonus track "God is IN"). 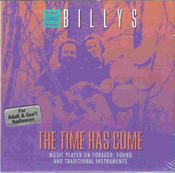 TIME HAS COME is the 1993 magnum opus of THE BILLYS, an original, singer-songwriter duo, whose "foraged folk music" features great vocal harmonies, homemade "industrial re-percussion" instruments, and guitars. The recording features an eclectic array of songs of hope, love, political intrigue, and late night travel vortices. Some of the homemade instruments include the 'maBOOMba' -- a marimba made of carpet tubes; 'tin can xylophone' -- fashioned from soup cans; and a 'kutlery kalimba' -- exactly that!