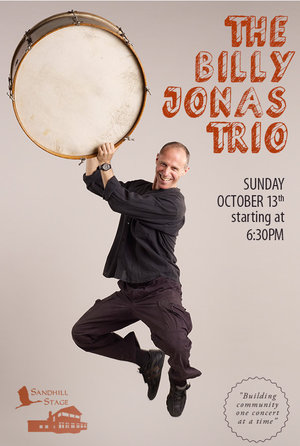 Next week Billy Jonas and the Billy Jonas Band will be heading down south to sunny Florida. On October 12 at 7:30 PM, they will be performing at the Unitarian Universalist of Ft. Lauderdale. The following night on the 13th at 6:30 PM in Gainesville, FL the band will be at the Prairie Creek Lodge- Alachua Conservation Trust (Sandhill Stage).

In other news there is a video montage of their house concert in Asheville, NC. Would you like to hold a house concert featuring the Billy Jonas Band? Contact Peggy Baldwin at peggy@loydartists.com.

Don’t forget, you will have the chance to sing on Billy’s new CD. You'll get an email offering you a way to sing on it, and to be part of a video. It's part of their Kickstarter fundraising campaign. Keep an eye out! (And keep one in, too).